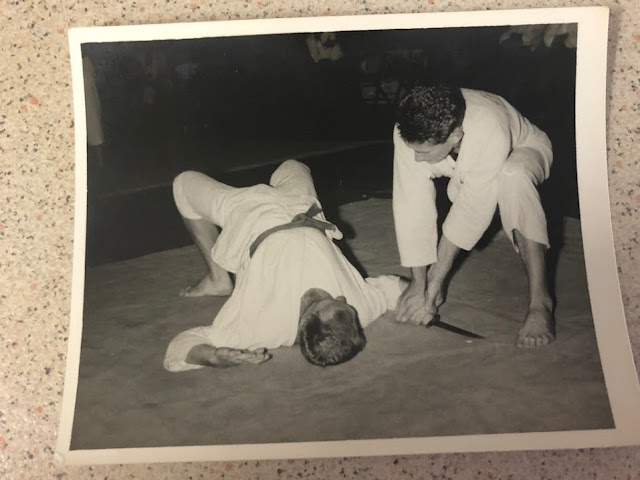 This blog has become a lightening rod for sharing memories about Jan de Jong and his martial arts teaaching.

The latest is by Sensei Dan Newcombe, founder of Self Defence Central Dojo and Tsutsumi Hozan Ryu International, who forwarded a number of photographs taken in the 1950s when his father and uncle trained under JDJ.

Dan is the second of three generations of his family that have trained/studied the jujutsu taught by Jan de Jong. He is continuing on in the truest tradition of JDJ by establishing his own school, modifying the grading system so as to improve the outcomes for students, upholding the integrity and standards that JDJ espoused, and attempting to internationalise JDJ teachings.


Dan described the above photo as an 'interesting wrist twist knife pinning on the ground.'

Here is a history lesson for students of the JDJ tradition. That is the original finishing position of a wrist twist technique that JDJ taught. The wrist twist joint locking technique was applied to take the opponent to the ground and then continued in order to apply a wrist twist lock on the ground. 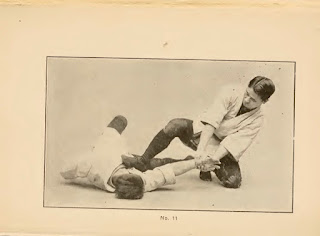 A similar technique is seen in Jiu-Jitsu: El Efectivo Metodo Japones de Autodefensa by Katsukuma Higashi in the early 1900s.


JDJ changed the finishing to this technique because of the risks inherent in the opponent being on their back with legs and one arm free to attack if the joint lock is not applied expediently and effectively. He changed it to the current form where the opponent is turned over onto their front.

FYI. The wrist twist technique is never in itself a throwing technique as Shioda increasingly described in his books on aikido. One of his earliest books explained that tori had to jump to avoid injuring their wrist, which is technically not a throw.